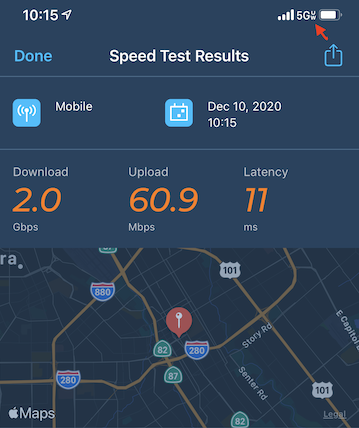 At Verana Networks, we are building an innovative 5G radio access network (RAN) solution for mmWave spectrum. The purpose of this post, the previous one, and subsequent ones that I will publish at the beginning of every quarter, is to share the mmWave 5G industry’s progress in the previous quarter. I hope you find these posts useful.

When the history of 5G in mmWave spectrum is written, the fourth quarter of 2020 will be remembered as the quarter when Apple surprised everyone by supporting mmWave 5G in all iPhone 12 models launched in the US, not just its most expensive “Pro Max” models. 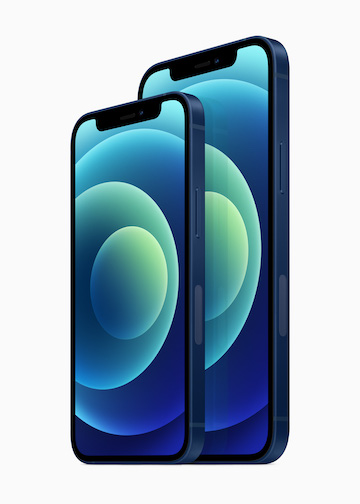 iPhone 12 was Apple’s grand entry into the 5G market. The marketers at Apple clearly understand that the one thing consumers want from every new generation of wireless technology is markedly higher speed than the previous generation. Low latency is good, and connecting billions of IoT devices is great, but hey, what is the point of a new wireless technology that is not ten times faster than the older one? That is why they called the iPhone 12 launch event, “Hi, Speed” (pun intended).

Speed does not come without spectrum, and as I have stated in previous blog posts, the largest amount of new wireless spectrum in the United States is in mmWave bands. In fact, the only way consumers can experience an iPhone 12’s peak speed of 4 Gbps is by connecting to a mmWave 5G network.

This is precisely what I did. I purchased an iPhone 12, activated it on a Verizon Unlimited data plan, and went for a walk near downtown San Jose’s convention center. I ran a speed test (using the OpenSignal app) and saw the dial go all the way up to 2 Gbps! And this is when (to the best of my knowledge), Verizon is just using 400 MHz of its mmWave spectrum in San Jose. Notice the tiny “UW” next to the 5G icon to indicate that I am using Verizon’s Ultra Wideband network. 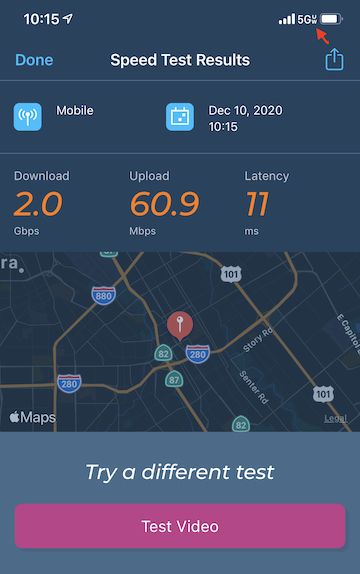 2Gb/s with 11 ms latency. The tiny “UW” next to the 5G icon indicates Ultra Wideband service

Separately, I compared the iPhone 12 operating on 5G DSS (dynamic spectrum sharing) with a Motorola Z3 running plain old LTE at several locations in San Jose and found that 5G DSS offered neither faster speed nor lower latency. However, DSS turned on the 5G icon on the phone and made me feel good about my iPhone purchase (a 5G iPhone should always operate on 5G, right?). 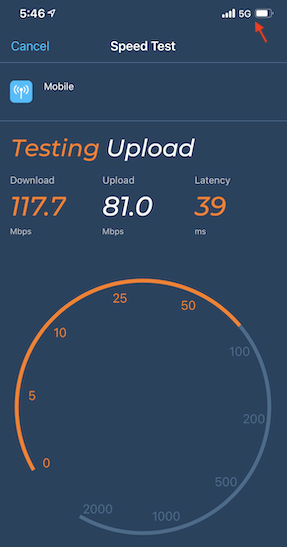 In Q4’2020, Google launched two affordable 5G smartphones, Pixel 4a 5G and Pixel 5. The US models of both these phones support mmWave 5G. Priced at $499 and $699, respectively, these devices offer a lower-priced alternative to the iPhone 12 series. With the four iPhones and two Google Pixel’s introduced in Q4’2020, the total number of mmWave 5G capable handsets available in the United States has now crossed twenty-four.

Unlike some other smartphone manufacturers, Apple and Google decided to include mmWave 5G in all the phones they are selling in the US. These manufacturers are accepting slightly lower hardware margins to simplify their marketing and distribution, and in the process, helping build a large installed base of mmWave 5G capable devices.

Assuming that Apple continues to support mmWave 5G in all its future iPhones and a 3-year replacement cycle, there will be almost 80 million mmWave 5G iPhones in the hands of customers by the end of 2022. Add to this mmWave 5G smartphones from Samsung, LG, Google, Motorola and other suppliers, and we are easily north of 100 million. By 2023, the installed base of mmWave 5G capable devices in the US could exceed 170 million. 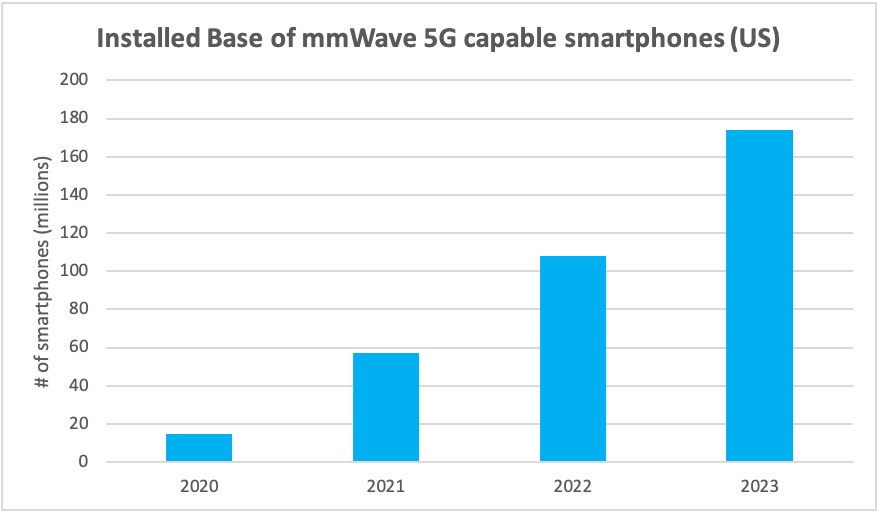 As support for mmWave 5G becomes the norm in the US, replacement cycle will drive installed base

Installed base of handsets will drive mmWave 5G network deployments

mmWave 5G networks cannot be built in the same way that low and mid-band networks are built. In low and mid-bands, service providers launch a new wireless technology by deploying the fewest number of cells that gives them the most coverage, launch service, and once enough subscribers have signed up for the service, add capacity by cell splitting. However, this “coverage first” deployment strategy is not practical for mmWave spectrum.

Instead, I expect mmWave 5G deployments to be driven by device adoption. mmWave spectrum is useful for providing a massive amount of targeted capacity, not wide area coverage. Once tens of millions of people have mmWave 5G capable smartphones, service providers can build mmWave 5G to provide capacity where needed. And when they do so, they will see an immediate return on their investment. This ROI may appear as increased customer satisfaction, lower churn, or acquisition of new customers looking for better performance.

At Verana Networks, we will keep tracking the market, and working hard to build our solution. If you found this post useful and would like to stay in the know, do follow Verana Networks on LinkedIn. I welcome your comments, questions and feedback!